Climate of the Southeast United States: Variability, Change, Impacts, and Vulnerability has been released. 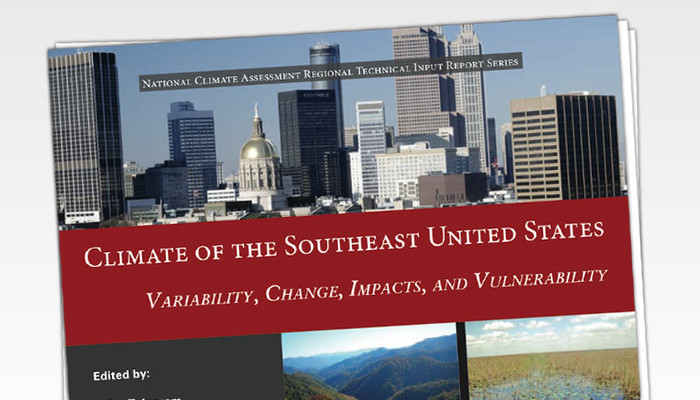 Prepared for the 2013 National Climate Assessment and a landmark study in terms of its breadth and depth of coverage,Climate of the Southeast United States is the result of a collaboration among three Regional Integrated Sciences and Assessments Centers: the Southeast Climate Consortium; the Carolinas Regional Sciences and Assessments; and the Southern Climate Impacts Planning Program; with contributions from numerous local, state, federal, and nongovernmental agencies to develop a comprehensive, state of the art look at the effects of climate change in the region.

The book summarizes the scientific literature with respect to climate impacts on the Southeast United States, including 11 southern states to the east of the Mississippi River, Puerto Rico, and the US Virgin Islands; reviews the historic climate, current climate, and the projected future climate of the region; and describes interactions with important sectors of the Southeast and cross-sectoral issues, namely climate change mitigation, adaptation, and education and outreach.

Rich in science and case studies, it examines the latest climate change impacts, scenarios, vulnerabilities, and adaptive capacity and offers decision makers and stakeholders a substantial basis from which to make informed choices that will affect the well-being of the region’s inhabitants in the decades to come.

Among the projected impacts of climate change in the Southeast:

Electronic copies of the report can be accessed on the Climate Adaptation Knowledge Exchange (CAKE) website – you can download a pdf version of the report for free or purchase a print version from Island Press.

About the Author: Lori Barrow

Lori served as an Information Transfer Specialist for the South Atlantic LCC, co-funded by the Southern Research Station of the U.S. Forest Service and the U.S. Fish and Wildlife Service.