To provide greater clarity and focus for regional conservation and multi-state collaborations, a new “Regional Species of Greatest Conservation Need” list is now available for use in the Southeast and in support of the Southeast Conservation Adaptation Strategy (SECAS). The National Wildlife Federation (NWF), as part of the Vital Futures project funded by the U.S. Geological Survey, initiated a process for identifying a set of regional priority species from the very large number of species collectively identified as priorities in the 15 Southeastern State Wildlife Action Plans. Over the past year, the Wildlife Diversity Committee of the Southeastern Association of Fish and Wildlife Agencies (SEAFWA) collaborated with NWF and other partners to evaluate these species and produced a list of 960 regional priority species, or “Regional Species of Greatest Conservation Need” (RSGCN). This effort was modeled after one previously carried out by the Northeast Association of Fish and Wildlife Agencies. Terwilliger Consulting Inc., who coordinated the Northeast RSGCN effort, provided the technical support and facilitation that led to the successful completion of the Southeast effort.

Because of the Southeast’s broad geographic reach, wide range of natural habitats, and diverse fauna, the 15 State Wildlife Action Plans collectively identify nearly 6,700 species as “Species of Greatest Conservation Need” (SGCNs). This regional priority setting process—carried out as a collaboration among Southeastern state fish and wildlife agencies and partners that involved more than 100 scientific experts—used a set of consistent criteria to review current scientific information and evaluate these state-identified SGCNs. Species were evaluated based on several primary factors, including: the level of conservation concern (i.e., extinction risk), regional stewardship responsibility (i.e., importance of the Southeast in conservation of the species); and biological or ecological significance (e.g., unique evolutionary lineages). The regional assessment focused on species in key groups, including vertebrates (mammals, birds, reptiles, amphibians, and fishes) as well as several better known groups of invertebrate animals (freshwater mussels, crayfish, and bumblebees). Scientific experts in each of these taxonomic groups were convened to evaluate the species and identify those that warranted identification as a regional priority. Additionally, the science teams characterized the level of conservation concern for each regional priority, ranging from moderate, high, and very high concern.

Overall, 960 species were identified as Regional Species of Conservation Need, representing about 25% of the species evaluated. Although a broad array of animal groups were evaluated as part of this process, the taxonomic composition of the regional priority list is striking. Freshwater fish, with 281 species, represent the group with the greatest number of regional priority species, followed by crayfish (172 and freshwater mussels (136). Together these three groups of aquatic organisms represent nearly two-thirds (61%) of regional priority species, highlighting the extraordinary levels of aquatic biodiversity in the Southeast and the precarious condition of many of those species. Indeed, if amphibians are included, many of which depend on freshwater habitats, the proportion of aquatic species on the regional priority list rises to 72%! 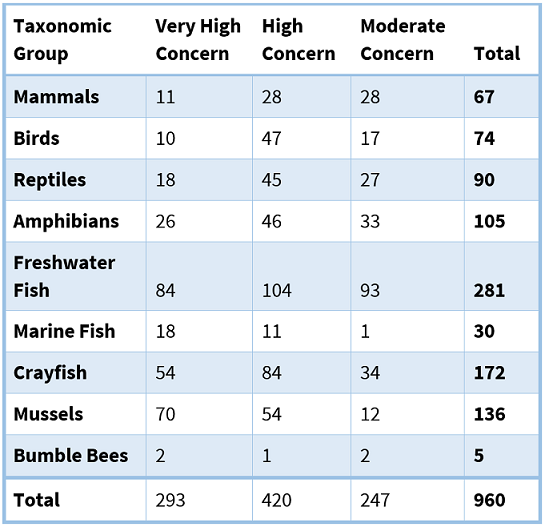 Table 1. Number of Regional Species of Greatest Conservation Need by taxonomic group and concern level. Of the 960 regional priority species, nearly one-third (31%) are regarded as “very high concern.” Another 44% were assessed as “high concern” with the remaining quarter of species considered to be “moderate concern.”

The number of regional priority species identified for each state varies widely, as depicted in Figure 1, with a high of 379 in Alabama. These patterns are a reflection of the underlying diversity of species in each state—and particularly number of at-risk and/or limited range species—which is also influenced by a state’s size and diversity of habitats. These patterns are also influenced by the use of the “regional stewardship responsibility” criterion in the assessment of priority species. In essence, Southeastern states have a special responsibility for the conservation of species restricted to (i.e., endemic) or primarily found in the region, and such species therefore received special attention in the assessment. Indeed, nearly 70% of regional priority species are endemic to the 15-state SEAFWA region. Regional endemics or near-endemics are, almost by definition, more likely to occur in centrally located states than in states on the periphery of the region.

More than half (55%) of regional priority species are shared by three or more states, and are therefore prime targets for cross-state conservation collaborations. The remaining 45% of species have narrow ranges, being found in just one or two states. Not surprisingly, a greater proportion of narrow-range species are of “very high concern” than more broadly distributed species (43% vs. 20%). 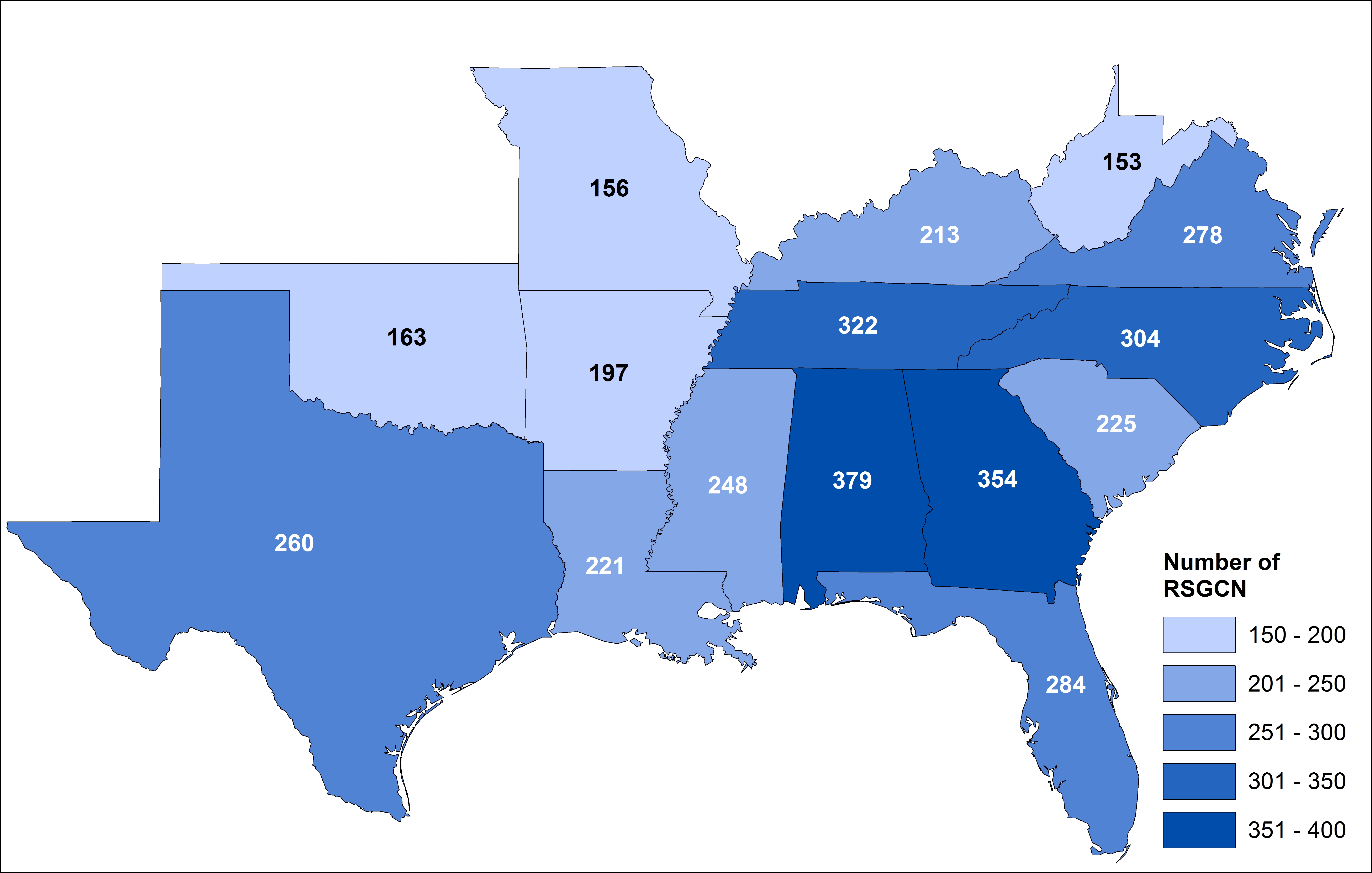 The list of regional priority species also clearly reflects relative extinction risk in the Southeastern biota. As displayed in Figure 2, nearly two-thirds (62%) of Southeastern RSGCNs are considered at-risk globally (G1-G3) based on NatureServe and natural heritage program conservation status rankings. Furthermore, the concern levels assigned to each priority species by the taxonomic expert teams are also highly consistent with these conservation status rankings. For example three-quarters (75%) of “very high concern” regional priority species are critically imperiled or imperiled (G1-G2) while just 5% of those species are regarded as globally secure (G4-G5). In contrast, just one eighth (12%) of regional priority species in the “moderate concern” category are considered critically imperiled or imperiled (G1-G2) while nearly one-half (49%) are regarded as globally secure. It is worth noting that while a given species may be relatively secure at the range-wide level (i.e., G4 or G5), the species may be vulnerable or imperiled at the state level (as reflected by its state, or “S” rank) in parts of the Southeast or across the entire region. The full list of RSGCNs is available here: https://airtable.com/shrDBqYvc0WlUIfh7

The RSGCN list for the 15-state Southeast region should greatly enhance the ability of fish and wildlife agencies to work across state boundaries, as well as with federal agencies and non-governmental organizations, to efficiently plan and implement species conservation efforts. This list of regional priority species is not only designed to promote increased cross-state conservation, but should also help target within-state conservation actions.

In the Northeast, for example, focus provided by an RSGCN list has benefited a range of species and conservation initiatives. The highest regionally ranked species (e.g., New England cottontail, Blanding’s and wood turtles, and brook floater mussels) have been the focus of competitive state wildlife grants for conducting standardized distribution and monitoring surveys, which provide the data for spatially explicit focus areas and conservation actions. The Natural Resources Conservation Service (NRCS) has funded land protection and habitat restoration to benefit these species, and land conservation organizations have purchased properties and conservation easements in some of focal areas. In September 2017, the U.S. Fish and Wildlife Service (USFWS) removed the New England cottontail from the candidate list of threatened and endangered species based on the collaboration of federal, state, and private partners that were dedicating resources to implementing the conservation plan. More recently, the Service rejected the proposal for listing brook floater mussels in part because of the cross-state collaborations already dedicated to its conservation. In addition, the USFWS Science Applications program has integrated information on RSGCN locations and habitats into the Nature’s Network landscape conservation design initiative, which is one of the inputs to the Southeast Conservation Blueprint.

The Southeastern United States covers a vast area characterized by an amazingly diverse array of wildlife species. Through such initiatives as SECAS, the Southeast Aquatic Resource Partnership, and America’s Longleaf Restoration Initiative, Southeastern states are already carrying out multi-state and multi-jurisdictional conservation planning and implementation. In addition, the SEAFWA Wildlife Diversity Committee is working with the USFWS on at-risk species status assessments as part of the multi-species listing decision process.

By clearly identifying regional species priorities, collaboratively identified and agreed upon by the states, the RSGCN list should be of particular value to the SECAS initiative. Indeed, the list is already being put to use in the 2019 report on progress toward achieving the SECAS goal, entitled Recent trends in Southeastern Ecosystems, which will be released this October.

Development of the RSGCN list was initiated by the National Wildlife Federation as part of the Vital Futures project funded by the Southeast Climate Adaptation Science Center, but also made possible by additional investments from several other institutions, including the U.S. Fish and Wildlife Service, Tennessee Wildlife Resources Agency, and Southeastern Association of Fish and Wildlife Agencies. This broad and successful regional collaboration that led to creation of the RSGCN list is a tangible demonstration of the prospect for real progress in achieving the SECAS vision and goal!

About the Author: Rua Mordecai

Rua coordinates science for the South Atlantic and Southeast Blueprints. He helps integrate feedback from users, local experts, and ongoing research to improve the Blueprints.